Early summer 2011, ten years ago. We started midPoint project. We were preparing to set up a company to provide funding for midPoint development. We got the name, but there is much more than just a name needed to establish a company.
MidPoint project was up and running, we got first release out and we were already working on next one. We were all convinced that open source is the right way to go. Open source is, in theory, a perfect way to develop and distribute software. However, there are few practical obstacles, such as the annoying habits of the developers to eat and sleep. Someone has to pay the bills.

Our plan was to set up a new company to provide funds for the development. We have already decided about the name: Evolveum. That was all we had. We knew that identity management software is needed. We knew that most of existing commercial IDM products fail miserably. We even had the code, albeit it was hardly better than a prototype. We knew there is an opportunity. For a bunch of people living in a post-communist part of Europe this was a once-in-a-lifetime opportunity. However, we had no idea how to take advantage of that opportunity. We had no business plan, we had no marketing, we had no partners and there were only a very few potential customers within our reach.

Therefore we started to tackle the most important problem first: company logo. We did what all the reputable companies do, we used our limited funds to hire a graphic designer. The idea was to keep the “proper engineering” theme that got us our name. The designer was a weird character. He did not even want to talk to us directly. All communication was mediated by a friend. Yet, his work was good. After a couple of iterations we were getting close to what we wanted.

This was the “proper 20th century engineering” or “Leonardo da Vinci” theme that I have envisioned. I loved the design. Keen marketing eye can probably spot all the problems already. But there was no keen marketing eye in our team at the time. Therefore we went on with the theme to design a website. Our brilliant-but-weird designer didn’t like the idea of getting his hands dirty with web design. Therefore we had to find a different chap. We were not that lucky this time. We went through several design iterations, getting from bad to worse. We were getting nowhere, and the time was running out. In the end I got angry, pulled together some pieces from the design proposals and glued them together with my amateur web design skills. It worked. We got our first company website. 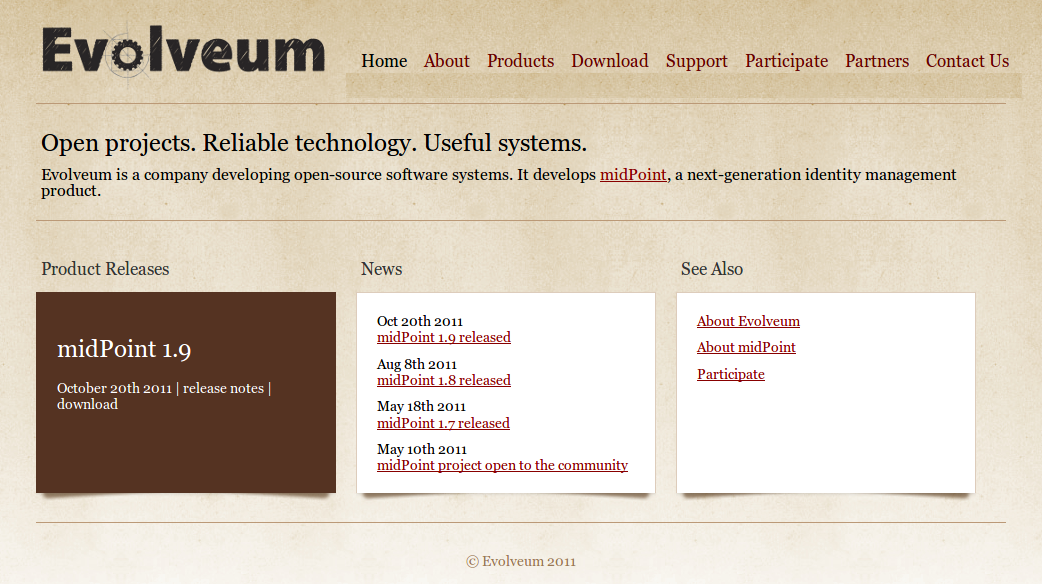 It looked swell! Just kidding. It was a disaster. But this was the best we could do at the time. By the end of summer we have got our web presence up and running, on our old server in the suburbs, connected to the Internet by a slow and unreliable link. It was a start.

Of course, the early days of Evolveum were not all about the looks. We were also working on a business strategy, although the word “strategy” is perhaps a huge exaggeration here. All of us fellow conspirators were running businesses for some time already. We had some business experience. However, those were local, east-europe-style freelance-like businesses. We had only a very rough idea what it means to run a global business. But more on that later.