MidPoint 3.7 “Darwin” was released. As the release nickname suggests Darwin is an evolutionary release. It brings few major features and changes. But more importantly it brings a large number of gradual improvements to almost every part of midPoint.

The most obvious change in midPoint 3.7 is its stand-alone deployment form. Previous midPoint versions were designed as traditional Java web applications, distributed in a WAR file that had to be deployed in a web container. This approach was a common routine years ago when midPoint project started. But the world moved on and midPoint had to adapt. Therefore, midPoint 3.7 moved to a stand-alone deployment. All that is needed is to download midPoint and start it up. No need to deploy it to a web container. The traditional WAR file is still provided as an deployment option and it is still supported. But the stand-alone form factor is now the recommended way to run midPoint.

MidPoint 3.7 also brings numerous improvements to identity governance features. The policy rules are even more powerful with extended set of constraints. The user interface now supports policy rules as well. Set of meta-data that midPoint maintains about assignments was expanded. There is now a nice visualization of an approval process. 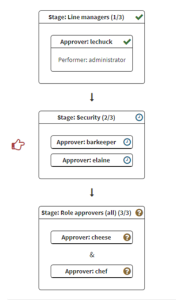 There are improvements to expressions, especially when used in RBAC. Autoassignment expressions can now be specified directly in the roles. And the expressions can now be used even in authorizations. Inbound mapping was significantly improved and now it is possible to assign roles directly from resource entitlements by using inbound mappings. Expression functions can now be organized into reusable libraries. This particular feature was often desired by the community for quite a long time. But in midPoint 3.7 it has got an endorsement from a subscriber, therefore it got implemented at last. There are many smaller improvements in user interface, expressions, mappings, bulk actions, authorizations, password policy, reporting, tasks, audit, logging and almost in any other part of midPoint.

During the development of midPoint 3.7 there was also an evolution of our business model. Almost all work on midPoint 3.7 was backed by subscription or sponsoring. In fact midPoint development team was fully utilized on this work and there was almost no time left for community features. It looks like this trend will continue. Therefore, if you want your issue fixed by Evolveum team you have to purchase midPoint subscription. We are also going to limit opportunities for sponsoring. As any software engineer knows, developing a new feature is not an easy task. But it is even more challenging to maintain the feature in a long run. Sponsoring is a nice way to fund development of new features. But it does not provide funding for maintenance. Only subscriptions can do that. Therefore, we are going to limit sponsoring in favour of subscriptions. It just makes much better sense in the long run. The year 2018 may be in fact the last year when any form of ad-hoc sponsoring is possible at all. Purchasing midPoint subscription is the best way to make sure your midPoint deployment goes smoothly.